Witnessing a mystical experience in a remote Buddhist kingdom

Whirling robes in vivid colours, red, blue, green and gold. Masks of demons and saints from the grotesque to the captivating. Jumping, thrashing and swirling bodies in a cacophony of colour and sound to delight and assault the senses. This is Cham Dance, a sacred masked dance to liberate all who watch from delusion and to pay homage to the sublime. In this article, catch a glimpse of what you could experience at one of these rituals. 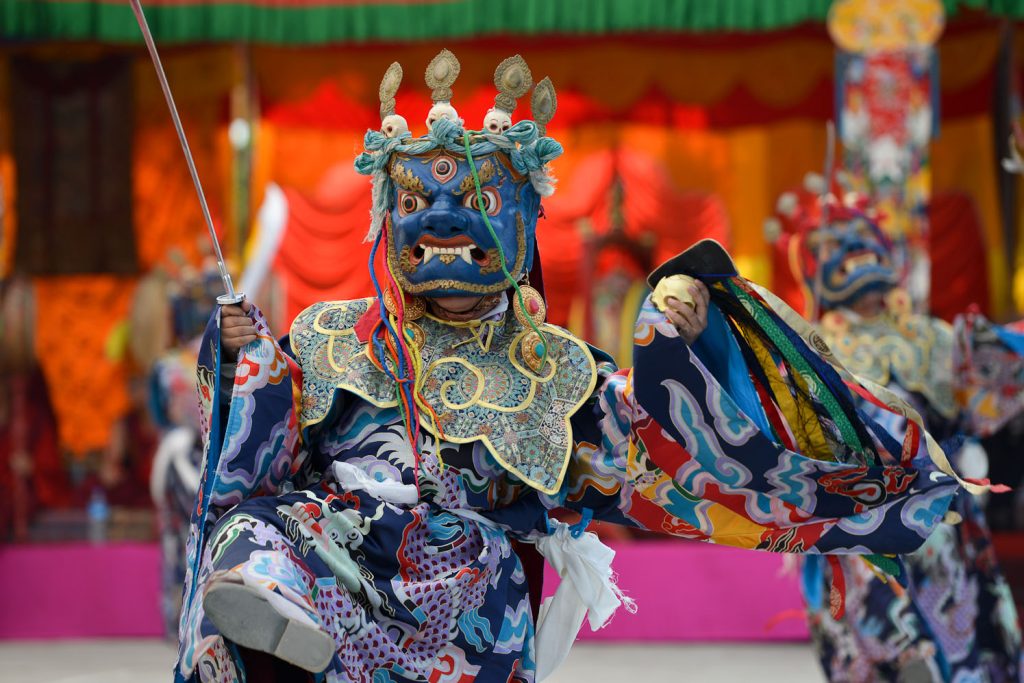 Cham Dance or Gar Cham is a tradition that is as old as the country’s history. ‘Gar’ means, movement involving twisting of the body and ‘Cham’ means movement of hands and legs. Gar Cham is a dance that combines these movements. These masked dances are performed by monks during the annual ritual of Tshechu or ‘Tenth Day’ – considered to be the birthday of Padmasambhava, Bhutan’s patron saint. 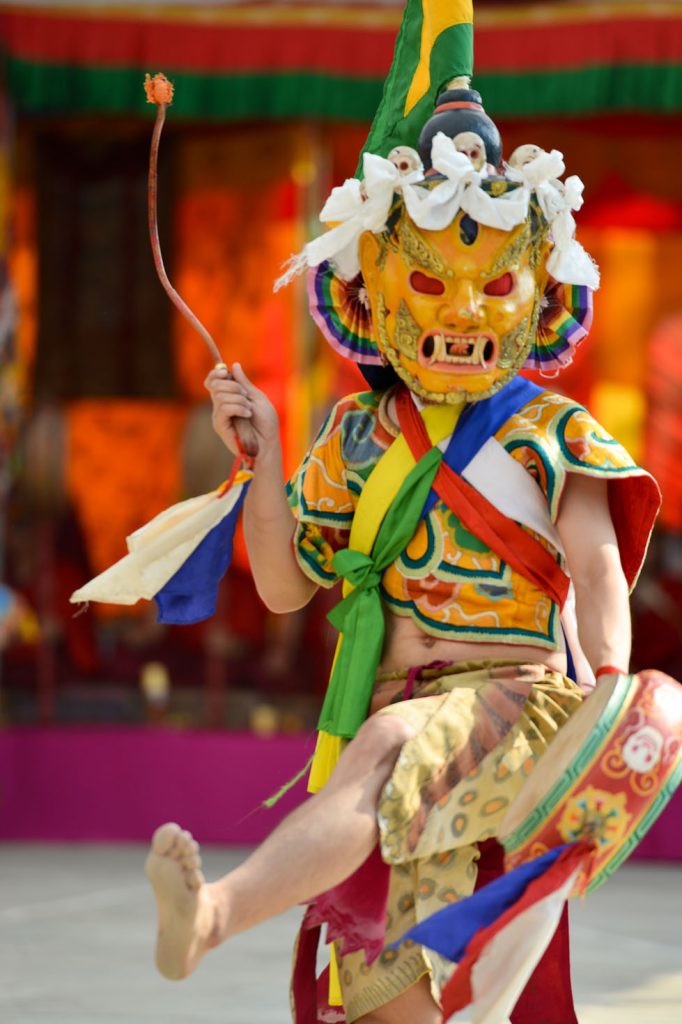 The first recorded Cham Dance was performed in the 8th Century, around 740-760 AD (1). The Indian saint Padmasambhava (also known as Guru Rinpoche) was invited to Samye Monastery in Tibet, the first Tantric Buddhist monastery, to banish evil spirits. Padmasambhava is renowned for bringing the teaching of enlightenment to Bhutan. With those teachings came various practices, traditions and arts, including Cham Dance. When Padmasambhava was invited to Bumthang by the King of Chagkar, Sendha Gyalpo, to vanquish Shelging Karpo, he performed the Cham Dance to attract the deity’s attention.

These dances not only give joy to onlookers but have a special spiritual significance. The ritual dances leave powerful karmic imprints in the minds of those who observe them. They enable onlookers to attain spiritual merit and liberation from worldly suffering.

Thong droe means liberation by watching. For lay onlookers, Cham Dances have the power to liberate them from delusion. The dances are dramatisations of the teachings of enlightened spiritual masters, created and performed for the benefit of sentient beings. The masked dancers perform the roles of manifestations of higher beings and deities, this enables the performers and onlookers to appreciate the values of human life and pay homage to the sublime. 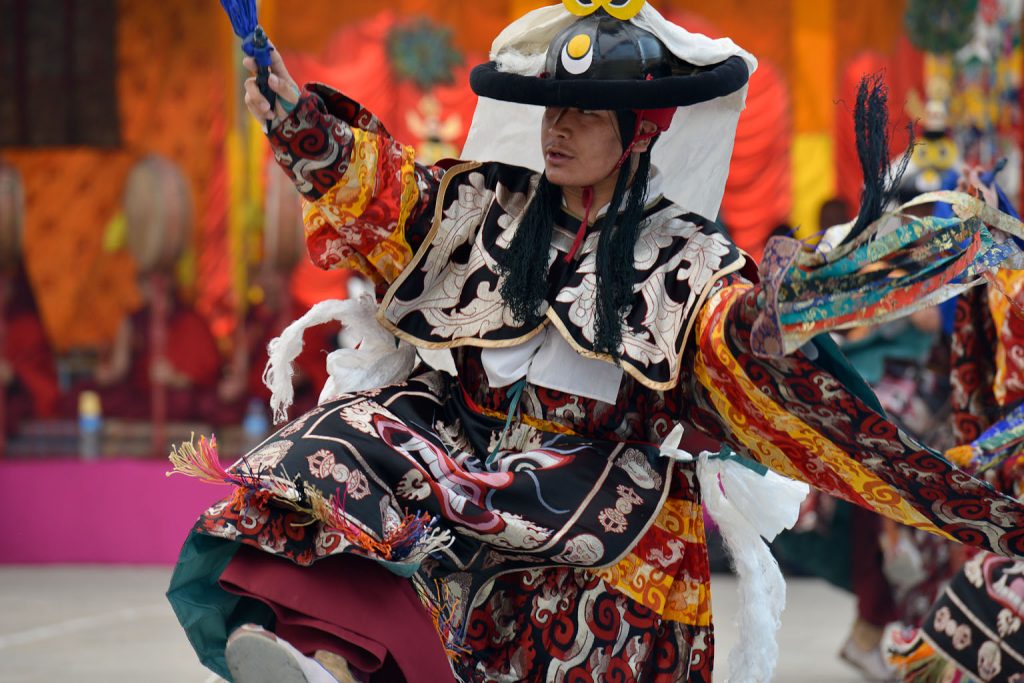 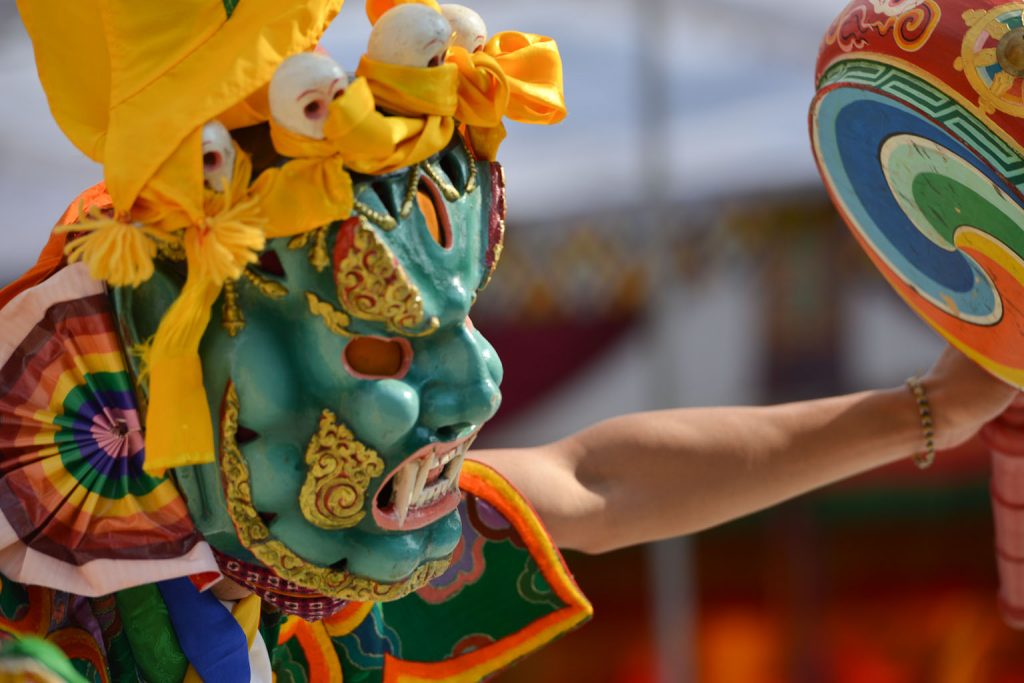 The dancers perform mudras (gestures) symbolic of the nine skills of dancing and eight manifestations of peaceful and wrathful deities. These are reminders of one’s spiritual and moral duties and obligations.

Each masked dancer must visualise their body as that of a divine being whilst performing their dance. They should visualise their speech as mantra, powerful enough to dissolve obstacles on the path to enlightenment. The mind should be visualised as a receptacle for the three types of meditation; right concentration, mindfulness and right view; and for the four sublime states; loving kindness, compassion, sympathetic joy and equanimity.

The movement of the dances can seem similar to other performing art practices that stem from a spiritual tradition. However, not only are these celebrations fantastic, elaborate, theatrical performances, they also have great spiritual and cultural significance. The ritual dances leave powerful karmic imprints in the minds of those who observe them. They enable onlookers to attain spiritual merit and liberation from worldly suffering. 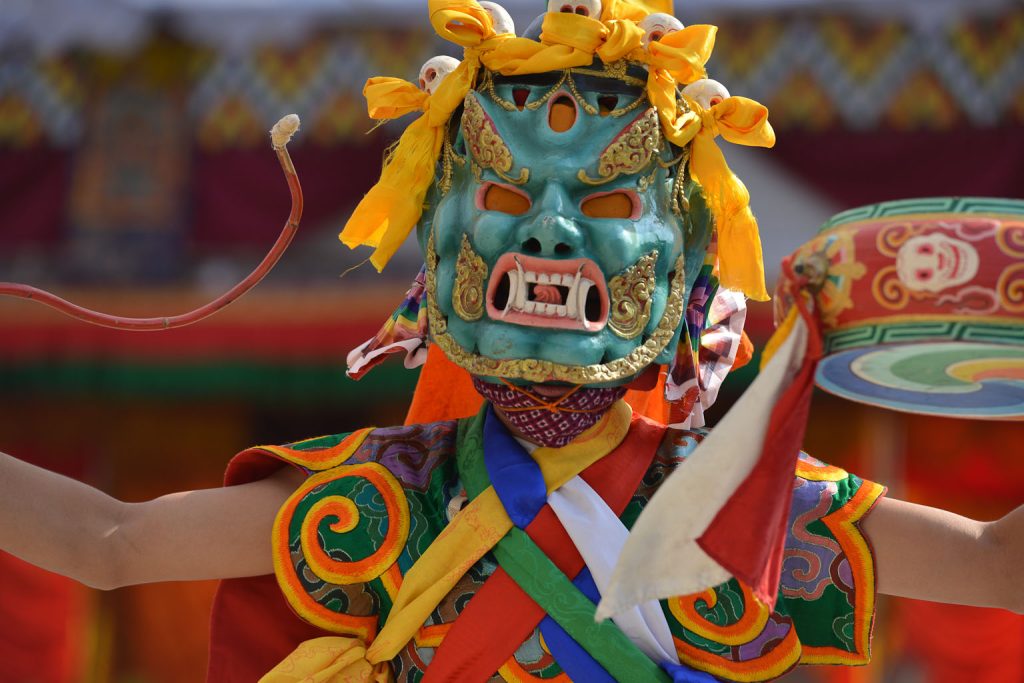 A list of Cham Dances which are performed by monks

For more information and detail on these numerous and varied Cham Dances read this excellent article on the subject from The International Information and Networking Centre for Intangible Cultural Heritage in the Asia-Pacific Region. 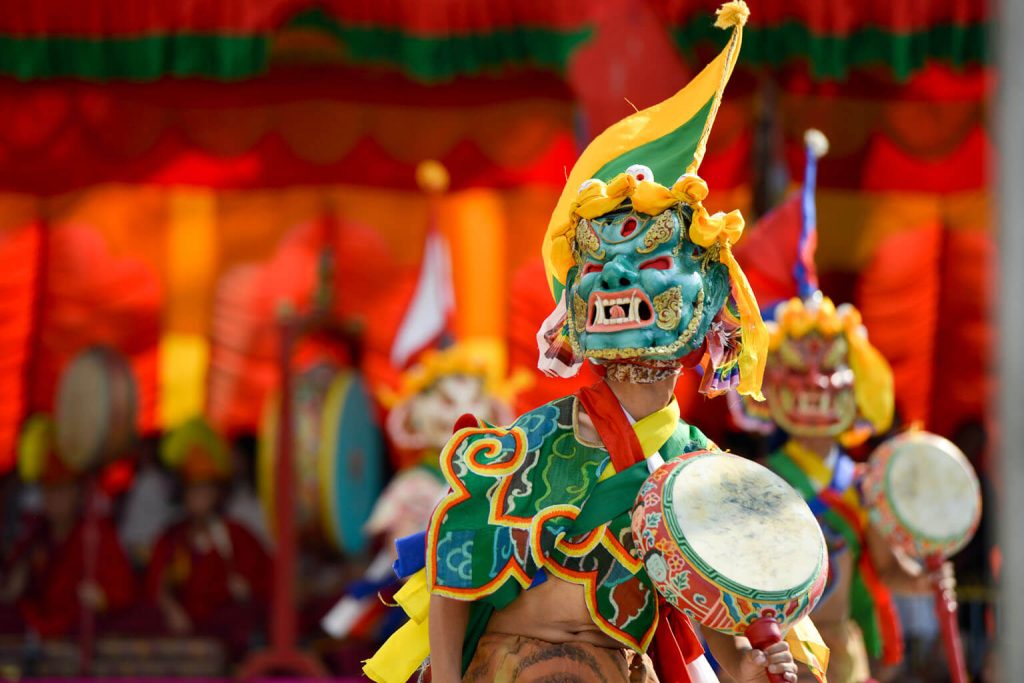 Continuing the tradition of masked dances

In the 17th century Zhabdrung Ngawang Namgyal introduced the dance of Mahakali which is performed during the annual festivals dedicated to the deity. 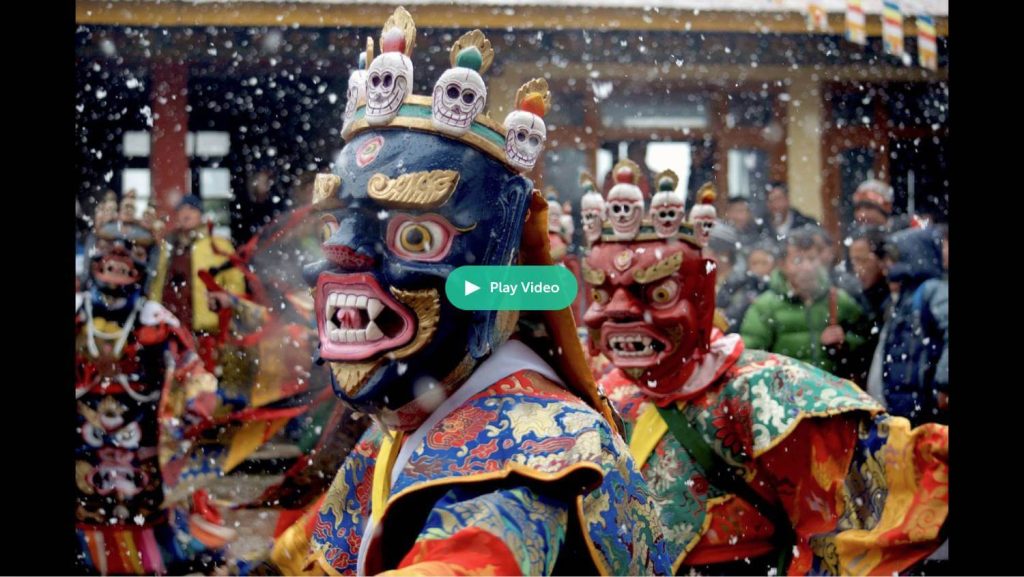 Take a look here at what you could witness at one of these dances in this spectacular documentary film by Brandon Beacon Hill. Embedded video.

“Ever since I have known of Tibetan Cham (13 years) I have always wanted to witness one. This is my third time seeing a Cham and my first in North Sikkim and it was undoubtedly one of the most incredible events I have ever seen. The day was pure magic!” – Director Brandon Beacon Hill on his experience of Cham Dance

Pema Lingpa (1450–1521), one of the five King Tertöns (2), visited Gom Kora in the 14th century AD. Tertöns are incarnations of Padmasambhava’s main disciples, of which Pema Lingpa is considered second only to Padmasambhava. At Gom Kora he enlarged the existing shrine and is known as the treasure revealer for discovering several sacred items including; a statue of the Buddha, Guru Padmasambhava’s amulet, the footprints of the Guru and his consort, and the footprints of the Guru’s horse.

Behind the Gomphu is the cave in which several impressions of Guru Padmasambhava can be found, including an imprint of his hat in the ceiling, thumbprints sealing a contract with a demon, and his wings from when he transformed into  a garuda (3).

In 1501 Pema Lingpa established the Tamshing Goemba, formally the Tamshing Lhendup Chholing (Temple of the Good Message). Tamshing is the original home of the Tsechus (festivals), the focal point of which is Cham dance. The Goemba lies is 5km from Jakar and is considered the most important Nyingma goemba in the kingdom. The structure was built by Pema Lingpa himself with the help of khandromas (female celestial beings). The architecture is unusual, with the height of the balconies being quite low – Pema Lingpa was a relatively short man and the ceiling was built to his exact height. The temple is filled with elaborate artwork, statues, paintings and masks used for Cham dances. The primary statue which is of Guru Rinpoche lies in the inner sanctuary. By his side are Jampa (Maitreya, the Buddha of the future) and Sakyamuni. This statue is of particular importance as it was sculpted by the khandromas, who created a number of the statues inside the temple. Tamshing Goemba is now the seat of Sungtrul Rinpoche, the current speech incarnation of Pema Lingpa.

Are you interested in experiencing a Cham Dance and Thong Droe (liberation by watching) for yourself?

Join us on one of Heather Elton’s Yoga Adventures in Bhutan.