The 11th C.E. Tibetan yogini and creator of Chöd profoundly influenced all schools of  Tibetan Buddhism.

MACHIG LABDRÖN (1055 – 1153 C. E.) WAS AN 11TH CENTURY TIBETAN YOGINI WHOSE TEACHINGS AND PRACTICES OF CHÖD (literally “severance” or “cutting through”) have profoundly influenced all schools of Tibetan Buddhism. She was unique in being both a woman and Tibetan, diverging from the traditional norm of male, Indian Buddhist masters. Her life is an inspiring story of a committed practitioner, at-times beggar woman, brilliant teacher, mother and lineage founder.

Machig’s biography begins with her previous life in which she was an Indian prince turned monk, named Mönlam Drup. Having achieved great spiritual and scholarly accomplishments at an early age, Mönlam Drup was repeatedly told in visions to go to Tibet to help beings there. At twenty, he entered a cave where he left his body and merged his consciousness with a wrathful blue-black dakini, entering the womb of Machig’s mother in Tibet.

Machig’s conception and birth were accompanied by numerous auspicious dreams and signs; most significant was the appearance of the syllable AH on the baby’s forehead, at the place of her third eye. Although her mother, Lady Bumcham, initially hid the baby, her father Chökyi Dawa recognized the mark as a sign of a dakini. Supported by her family, Machig developed her spiritual gifts from an early age; by the age of eight she could recite The Perfection of Wisdom in Eight Thousand Lines (also known as the Prajna Paramita sutra). At 13, Machig lost her mother and began traveling with her sister to study with several great teachers of her time. She soon became known for her depth of Buddhist scholarly knowledge and extensive recitation skills which outshone many of her own teachers.

“Machig’s birth was accompanied by auspicious signs, like the appearance of the syllable AH on the baby’s forehead, at the place of her third eye.”

At around 20, Machig met Kyotön Sonam Lama, a well-respected teacher who had retreated to mountain caves. Knowing of her great accomplishment in reciting the Prajna Paramita sutras, he suggests that she investigate her own mind and move beyond mere recitation and conceptual understanding. During a reading of the chapter on demons, Machig gains true realization of the inherent meaning. Having cut through ego-fixation, Machig entered a new chapter in her life, deciding to give up the comforts, luxuries, and high society that she had been accustomed to, and turning instead to wearing beggar’s cloths, associating with lepers and other outcasts, wandering aimlessly, sleeping anywhere, eating anything. 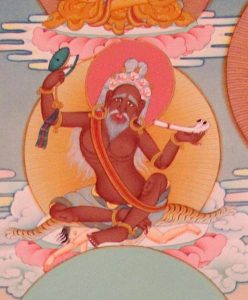 Another key story in Machig Labdrön’s life takes place while receiving an empowerment from Sonam Lama. In a state of profound samadhi, meditative absorption, Machig floats through the temple walls, out into the air, and finally up into a tree which stands at the edge of a lake belonging to a fierce naga king, or water spirit. Infuriated by her disrespect of his territory, the naga gathers an army of fierce and wild nagas who mount an attack on the naked girl sitting in total equanimity in the tree. Rather than fleeing or attacking, Machig instead turns and offers her body as food to the nagas. Stunned, the nagas vow their allegiance and eternal protection to Machig. This is a seminal story of feeding rather than fighting, the underlying paradigm of Feeding your Demons.

MACHIG’S ENCOUNTERS WITH AND TEACHINGS RECEIVED FROM DAMPA SANGYE, a famed Indian master, provided the basis for her development and formalisation of the Mahamudra Chöd for which she is best known. It is said that Dampa came to Tibet specifically looking for Machig, acclaiming the vast benefit she would offer beings. Asking how she might best help beings, Dampa tells Machig:

“Confess all your hidden faults! Approach that which you find repulsive! Whoever you think you cannot help, help them! Anything you are attached to, let go of it! Go to places that scare you, like cemeteries! Sentient beings are a limitless like the sky, be aware! Find the Buddha inside yourself. In the future your teaching will be as bright as the sun shining in the sky!”

Following a series of visions and prophesies from her lamas, Machig encountered Töpa Bhadra, an Indian yogin who became the father of her children. In their first union, radiant rainbow light is seen streaming from their room as though the house had caught on fire. At the age of 24, Machig gave birth to her first son, and in the ensuing few years to another son and daughter. Having accrued fame and renown for her spiritual accomplishments, Machig was now shunned in her new role as partner and mother. She and their small family entered a time of extreme poverty, wandering through various parts of Tibet.

Above, Machig Labdron thangka. 1800-1899. Tibet. Rubin Museum of Art. Beautiful, youthful and appearing as a wisdom dakini, she is white in colour, with one face, three eyes and two hands. Adorned with a tiara of gold and jewels, gold earrings and a blue and white silk scarf, she holds upraised in the right hand a double-sided damaru (hand drum) decorated with silk streamers. In the left hand held at the hip is a vajra-handled bell. Supported on the left leg with the right raised up she stands in a dancing posture above a moon disc and multi-coloured lotus blossom surrounded by a red nimbus and outer sphere of rainbow light.

At the top left in a two storied house is the root guru Kyoton Sonam Lama along with Machig and fellow students. At the right, again on the second level are scenes of Machig with the brown skinned Indian Padampa Sanggye – founder of the Zhije Tradition and inspiration for the development of Cho. Descending along the right and left sides are vignettes from the biography of Machig portraying early childhood, family and the pursuit of Dharma teachings. The tradition of Cho, severing the four maras, is practiced to a greater or lesser degree by all the schools of Tibetan Buddhism. §

AT 35, MACHIG DECIDED TO LEAVE HER CHILDREN AND TÖPA  BHADRA, and within a few years established Zangri Khangmar, the Red House of Copper Mountain, the primary seat of her teachings and activities until the end of her life. From here her teachings and reputation grew once more, spreading throughout the provinces of Tibet. Learned practitioners came to meet and debate with Machig, and she continually proved herself as a profound and realized teacher.

During the early years at Zangri Khangmar, Machig had a profound visionary experience in which Tara, the deity of profound compassion, and a host of dakinis came to her. Although Machig claims she is only a foolish and humble woman, Tara reveals that she is a mind emanation of Prajna Paramita, the Great Mother, source of all. Thus, a direct lineage is established between Prajna Paramita, Tara, and Machig Labdrön as the human teacher. Urging her to claim her seat, Tara admonishes “don’t be timid.”

Machig’s younger son and daughter rejoined her at Zangri Khangmar, both showing great potential as practitioners. Machig cured her son, Tönyön Samdrup, of his mental illness, and offered him numerous teachings and empowerments before sending him into retreat in a closed-off cave for several years. Eventually, all three of her children became key lineage holders of her teachings.

AS HER FAME CONTINUED TO GROW, WORD OF MACHIG’S TEACHINGS REACHED INDIA AND THE SCHOLARLY BUDDHIST ESTABLISHMENT. Three Indian pandits “fast walk” to Tibet to question and investigate the legitimacy of this Tibetan woman and her teachings of Mahamudra Chöd. Hundreds of thousands of people are said to have gathered for a public debate in which Machig displayed her profound understanding and elucidated her past lives, including her most recent one as Mönlam Drup. As foretold, her previous male body is found in the Indian cave where she left it. Machig Labdrön’s legitimacy as a teacher and lineage founder is established. Invited to offer her teachings in India, Machig refused, maintaining the unique roots of her lineage in Tibet and her commitment to the Tibetan people.

At the age of 99, Machig Labdrön passed into the land of the dakinis. • 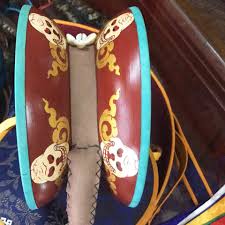 If this article has sparked your interest visit the cave of Machig Labdrön on Heather Elton’s Yoga Adventure in Bhutan May 11 – 21, 2019. Click here for more details and to apply.