The Navadurgas, or the nine manifested forms of Goddess Durga, are venerated during the festival of Navaratri. In the Chandi Path, the Navadurgas are known as the Relievers of Difficulty and each Devi is endowed with unique powers and characteristics. The Navadurgas emerged from Ma Durga’s forehead to help her destroy Mahishasura, the Buffalo Demon, in the 5th century tale the Devi Mahatmya. Each Devi among the Navadurgas has her own name and iconography, governing planet, and mantra for invocation. The Navadurgas are: Shailaputri, Brahmacharini, Chandraghanta, Kushmanda, Skandamata, Katyayani, Kalratri, Mahagauri and Siddhidatri. 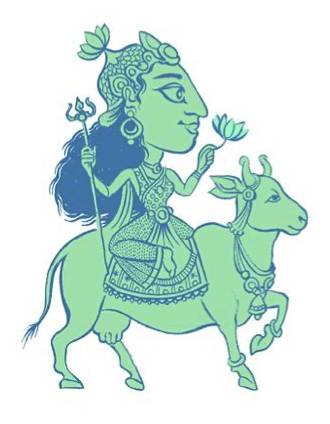 Shailaputri
The first among the Navadurgas, she is known as the Goddess of Inspiration. She manifested after the self-immolation of her form as Sati. The Mother Goddess took birth in the house of the King of Mountains, as the daughter of Lord Himalaya. Shailaputri literally means the daughter (putri) of the mountain (shaila). Devi Shailaputri is depicted with two arms and holding a trident and a lotus blossom. The lotus represents purity and devotion, while the prongs on the trident represent the past, present, and future. She rides on mount Nandi (bull).
Day of worship: 1st day of Navaratri
Governing planet: Moon
Om Devi Shailaputryai Namah
ॐ देवी शैलपुत्र्यै नम 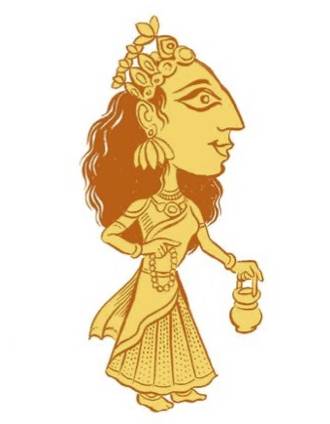 is known as the Goddess of Sacred Study. The Mother Goddess took birth at the home of Daksha Prajapati, as his daughter, Sati. This unmarried form of the Mother Goddess is worshiped as Brahmacharini. Her name means “one who practices devout austerity”. She walks on bare feet, carrying a japa mala in her right hand and a kamadalu (water pot) in her left hand. She endows happiness, peace, prosperity, and grace upon all devotees who worship her. She is the way to emancipation, called Moksha.
Day of worship: 2nd day of Navaratri
Governing planet: Mars
Om Devi Brahmacharinyai Namah
ॐ देवी ब्रह्मचारिण्यै नम 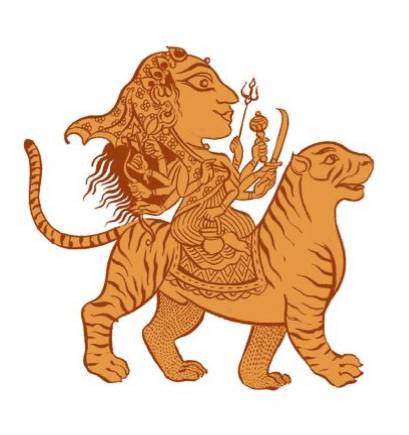 Chandraghanta
is known as the Goddess of Delight of the Practice. After marrying Shiva, she adorned her forehead with a crescent moon (chandra) shaped like a bell (ghanta) and became known as Chandraghanta. She is charming, has a golden bright complexion and mounts the tigress. Like Durga, Chandraghanta has three eyes and ten arms, each holding a weapon. She carries trishul, gada, sword and kamadalu in her four left hands and keeps the fifth left hand in varada mudra, the gesture of dispensing boons. She carries a lotus flower, bow and arrow, and japa mala in four right hands and keeps the fifth right hand in abhaya mudra, the gesture of fearlessness. She is all- seeing and ever-vigilant, ready to battle evil from whatever direction and represents peace, tranquility and prosperity. It is believed that the sound of the moon-bell on her forehead drives all types of evil away from her devotees.
Day of worship: 3rd day of Navaratri
Governing planet: Venus
Om Devi Chandraghantayai Namah
ॐ देवी चन्द्रघण्टायै नम 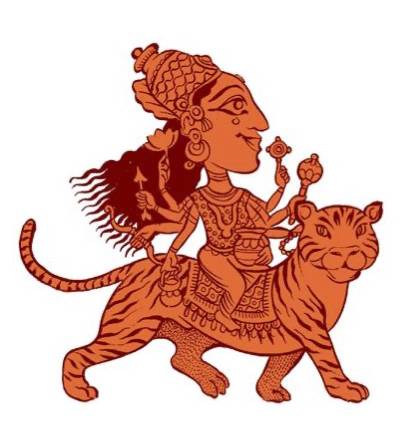 is known as the Goddess of Purifying Austerity. Her name means “Creatrix of the Universe.” Kushmanda was the first manifestation of Adi Parashakti and brought light to the dark cosmos. The glow and radiance of her body is as luminous as that of the Sun. Kushmanda created the universe in the flash of her smile and later liberated the Sun’s energy into the universe. Kushmanda rides a lion, symbolizing strength and courage in the face of adversity. She has multiple limbs in which she holds a kamandalu, bow and arrow, and lotus in her right hands. Her left hands hold amrit kalash (pot of nectar), japa mala (prayer beads), gada and chakra. She is believed to bestow siddhis (supernatural powers) and niddhis (wealth) upon her devotees.
Day of worship: 4th day of Navaratri
Governing planet: Sun
Om Devi Kushmandayai Namah
ॐ देवी कूष्माण्डायै नम 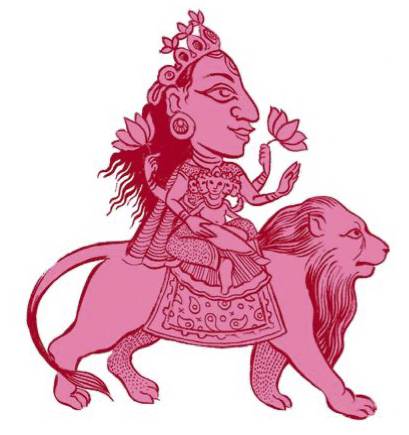 Skandamata
is known as the Goddess Who Nurtures Divinity. She is the mother of Skanda, or Lord Kartikeya, who was chosen by the gods as their commander-in-chief in the war against the demons. Skandamata mounts the ferocious lion and has four arms and three eyes. She carries lotus flowers in her upper two hands. She holds baby Skanda in one of her right hands and keeps the other hand in abhaya mudra.
Day of worship: 5th day of Navaratri
Governing planet: Mercury
Om Devi Skandamatayai Namah
ॐ देवी स्कन्दमातायै नमI 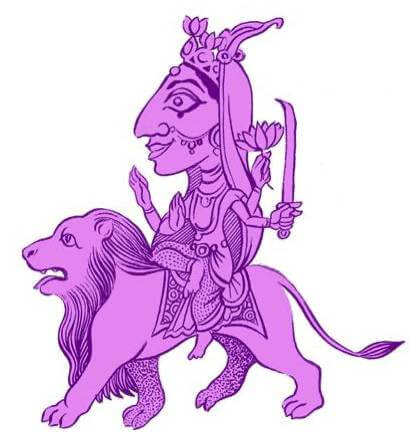 is known as the One Who is Ever Pure. She is the daughter of Sage Katyayana and scriptures refer to her as a symbol of power, strength, knowledge, the victory of good over evil and the ability to show courage. She rides on a magnificent lion and is depicted with four arms; she carries a lotus flower and sword in her left hands and keeps her right hands in abhaya mudra and varada mudra. Goddess Katyayani is believed to be one of the most ferocious forms of Ma Durga. Traditionally, she is associated with the color red, just like Goddess Durga who is the primordial form of Shakti.
Day of worship: 6th day of Navaratri
Governing planet: Jupiter
Om Devi Katyayanyai Namah
ॐ देवी कात्यायन्यै नम 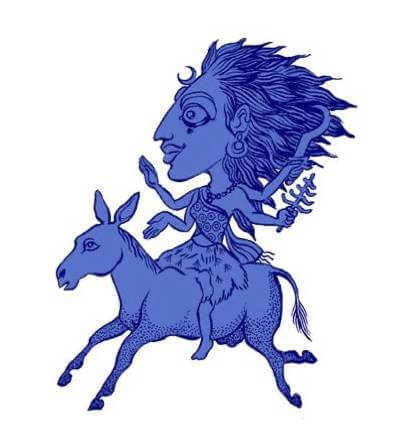 Kalratri
is known as the Goddess of the Dark Night of Overcoming Egotism and is the most ferocious form of the Mother Goddess. She manifests to destroy the demons Sumbha and Nisumbha. Born in a fit of divine rage and anger, she emits a radiant light from her body from which darkness and evil cannot hide. Lightning flashes from her necklace and flames shoot from her mouth. She rides on a donkey, has a black skin, disheveled hair, three eyes and four arms. She carries a sword and deadly iron hook in her left hands, both of which she uses to fight the forces of evil. Her right hands, are in abhaya mudra and varada mudra offering devotees protection from darkness and allaying all fears. Despite her appearance, Hindus believe that she can bestow a sense of calm and inner peace upon all who worship her.
Day of worship: 7th day of Navaratri
Governing planet: Saturn
Vahana: Donkey
Om Devi Kalaratryai Namah
ॐ देवी कालरात्र्यै नम 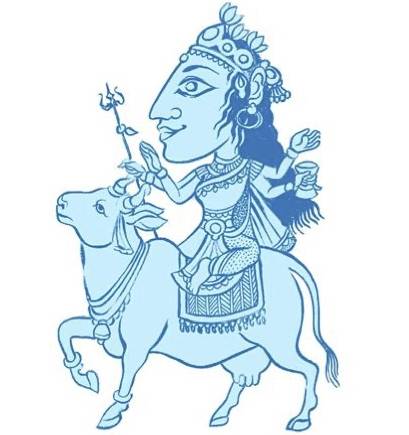 is known as the Goddess of the Great Radiant Light. Mahagauri means “extremely white” and refers to her luminous beauty, which radiates from her body. She is known as the forgiving goddess and forgives sinners and purifies them. Like Goddess Shailaputri, she rides the bull, wears white clothes and has four arms. Her right hand is in abhaya mudra, the pose of allaying fear, and her right lower hand holds a trident. One left hand holds a damaru (a small drum) while the other is in varada mudra to grant blessings to her devotees. By paying homage to Mahagauri, all past, present, and future sins will be washed away, imparting a deep sense of inner peace.
Day of worship: 8th day of Navaratri
Governing planet: Rahu
Om Devi Mahagauryai Namah
ॐ देवी महागौर्यै नम Siddhidatri
The ninth and final among the Navadurgas, she is known as the Goddess Who Grants Perfection. In the beginning of the universe,
Lord Rudra worshiped the unmanifest form of the Mother Goddess, Adi
Parashakti. Legend says that Adi Parashakti manifested as Goddess Siddhidatri
from the left half of Shiva. Her name means “giver of supernatural power,” and
she bestows blessings upon all deities and devotees of the faith. Like some of
Durga’s other manifestations, Siddhidatri rides a lion. She has four limbs and
carries a mace, a spinning disc (Sudarshana Chakra), a conch shell, and a lotus.
The conch, or shankha, represents longevity, while the spinning disc symbolizes
the soul or timelessness. Siddhidatri bestows all types of siddhis upon her
devotees and hence is worshiped by humans, gandharvas, asuras and devas alike.
Day of worship: 9th day of Navaratri
Governing planet: Ketu
Om Devi Siddhidatryai Namah
ॐ देवी सिद्धिदात्र्यै नम

Read Part Six of The Goddess Episodes, KALI MA. WHAT ABOUT THE TONGUE?