THE GODDESS EPISODES: Part 6 – What about Kali Ma’s tongue?

The Goddess manifests in a variety of forms, from the coy and demurely clothed golden Gauri to the ultimate wrathful, terrible form of the Mother —Smashan Kali, queen of the charnel grounds, where Devi stands on a corpse and holds a skull cup and a piece of rotten flesh in her hands.

Kali is one of the ten Mahavidyas. Many goddesses look like her whether they come from Hinduism, Kashmiri Shaivism or Tibetan Buddhism. She is depicted as possessing a soothing dark complexion, shining like a blue stone, with a range of skin color from black to golden. She can have ten faces, ten feet, and three eyes for each head.

She is in an absolute rage. Eyes are red with intoxication. Hair is disheveled. Small fangs protrude out of her mouth, and her tongue is lolling, dripping with blood. Her body is firm and youthful, often shown naked or wearing a tiger skin or skirt made of human arms; she is garlanded by a mala of 108 human skulls. She can have any number of arms from two to the ten-armed Mahakali form, a different mudra in each hand, wielding a variety of weapons, one hand holding a bloodied sword and another a freshly severed human head. She is accompanied by nagas (serpents) and a jackal. She stands on the calm and pros trate Shiva, usually with her right foot forward to symbolize the more popular Dakshinamarga or right-handed path, as opposed to the more infamous and transgressive Vamamarga or left-handed path of tantra. While there are many goddesses who, like Kali, are naked and associated with blood and death, including Chamunda, Bhairavi and Bhagavati, none stick out their tongue like Kali. Her outstretched tongue distinguishes Kali from all other goddesses of the Hindu pantheon. 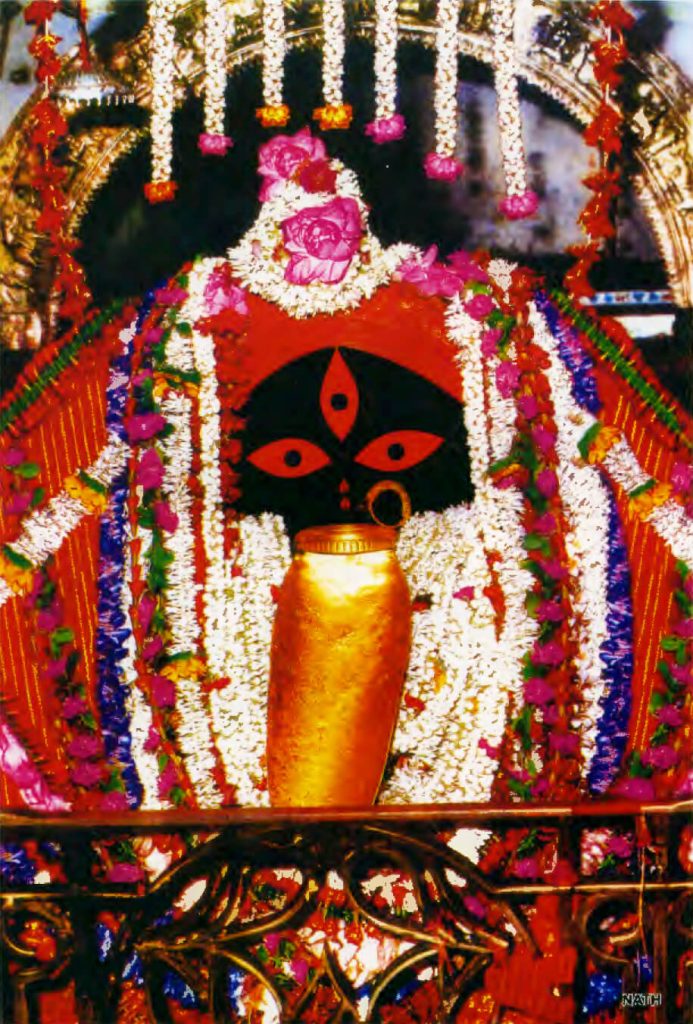 In the famous legend, Devi Mahatmya (400-600 C.E.) Durga summons Kali to combat the demons. Kali manifests from Durga’s forehead as the ultimate savior to salvage a situation gone terribly wrong. When Durga and her band of fierce warrioresses, known as the Matrikas, wound the demon Raktabija in an attempt to destroy him, they make the situation worse. Raktabija, whose name means “blood-seed”, has the magical ability to duplicate himself, instantly, every time a drop of his blood falls to the ground. The bloody battlefield becomes an ocean of rampaging Ratabija warriors. When Durga summons Kali to help, Kali unfurls her tongue and spreads it across the battlefield. She swallows the swarm of blood-born demons and sucks up the blood from the original Raktabija until he falls lifeless. Kali’s tongue is a weapon to be feared, a reminder that nature ultimately consumes all life.

The Devi Mahatmya describes the creation of Kali:

Out of the surface of Durga’s forehead, fierce with frown, issued suddenly Kali of terrible countenance, armed with a sword and noose. Bearing the strange khatvanga (skull-topped staff), decorated with a garland of skulls, clad in a tiger’s skin, very appalling owing to her emaciated flesh, with gaping mouth, fearful with her tongue lolling out, having deep reddish eyes, filling the regions of the sky with her roars, falling upon impetuously and slaughtering the great asuras in that army, she devoured those hordes of the foes of the devas.

Some legends say that after she killed the demon, his blood drove Kali mad. Her anger didn’t subside and she continued on a rampage of ruthless destruction and fearless random killing—a modern- day serial killer. The gods begged Shiva to stop her. He took the form of a wooden log and lay down in the road. Until then everything Kali set foot on was destroyed, yet the log remained the same, making her rethink her actions. At that moment Shiva resumed his god form and Kali realized she was stepping on her husband. (According to more patriarchal interpretations that became popular in the 19th century, she bit her tongue out of embarrassment.) Kali was ashamed to learn that her bloodlust had prevented her from recognizing Shiva, from having pure vision to see the Truth in everything. 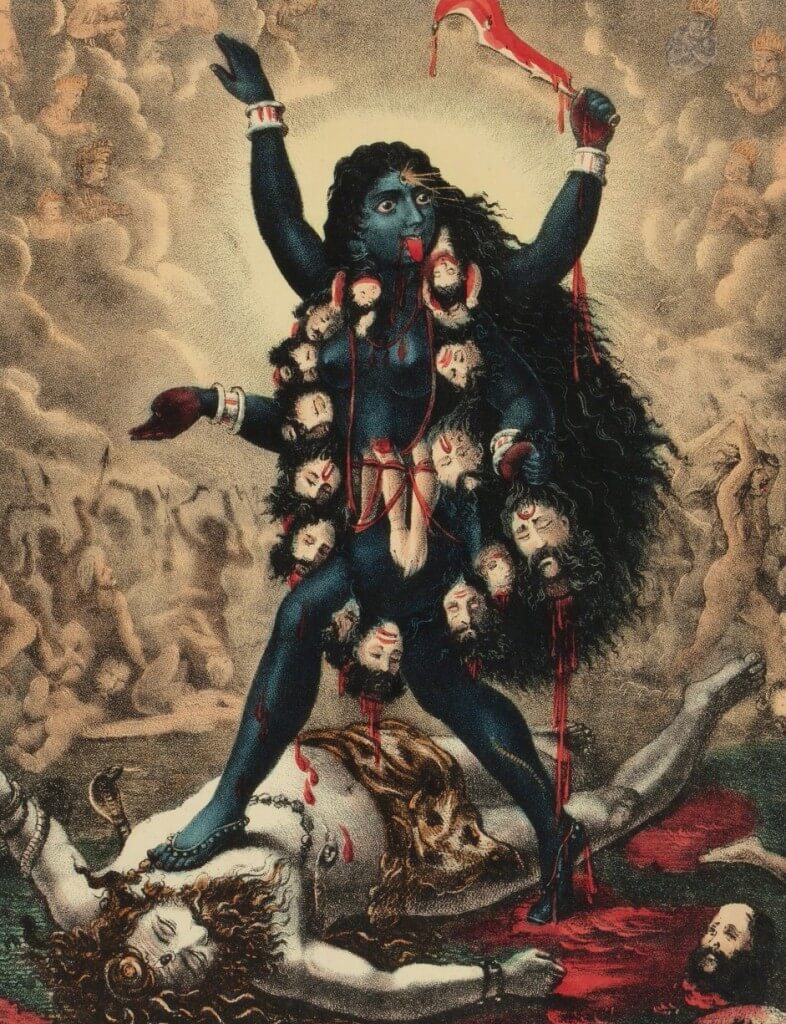 In spite of her seemingly terrible form, Kali Ma is often considered the kindest and most loving of all the Hindu goddesses, and is regarded by her devotees as the Mother of the whole Universe. When the Bengali saint Ramakrishna once asked a devotee why one would prefer to worship Mother over him, this devotee rhetorically replied, “Maharaj, when they are in trouble your devotees come running to you. But, where do you run when you are in trouble?”

The name Kali refers to her darkness, but kali is also the feminine form of the Sanskrit kala, meaning “time”. Our perception of life is based upon our experience of existing in time and the inevitable changes we experience until death. Perhaps her lolling tongue provokes us to delve deep within and confront the samskaras (psychological imprints) and toxic emotions that we shy away from.

Kali is worshiped as the destroyer of evil, the slayer of the demons; she reminds us of the harsh consequences of samsara, the cycle of death and rebirth to which life in the material world is bound: suffering, pain, aging, and death. But she is also the divine protector who bestows moksha, or liberation. Her transformative power underlies her diverse forms. Never depicted in a state of stillness, she is the eternally dancing Kali whose sinuous motions are the ebb and flow of nature–– evident in the alternating cycles of creation and destruction, day and night, birth and death.

Kali the Mother is widely venerated throughout India and abroad. She is particularly popular in West Bengal where the city-dwelling businesswoman of Kolkata and the Adivasi tribal woman, despite occupying different social spheres and worshiping completely unrelated deities, both consider Kali to be their patron goddess. ♦

Read the Part Seven of the Goddess Episodes, THE PILGRIMAGE.