THE GODDESS EPISODES: Part 2 – What is a Shakti Peeth? | NĀMARŪPA

Shakti Peeth—“Seat of Shakti” is a sacred place of eternal power — a significant shrine or pilgrimage destination — where a part of Devi Sati’s body, or a piece of her jewelery, fell to earth. Shakti refers to the Goddess worshiped at each location, all being manifestations of Sati; later known as Parvati or Durga.

An epic story from the Puranas, told in a nutshell: Devi Sati was the first wife of Lord Shiva. Prajapati Daksha was a Brahmin priest and son of Brahma, the creator of the world. He meditated and prayed he would receive Adi Shakti, or the Supreme Goddess, as one of his daughters. Devi Sati was born as his daughter. She was destined to marry Shiva. Daksha disliked Shiva for his beggar-like appearance. Shiva is the ultimate yogi living on the margins of society, absorbed in meditation for eons, naked except for cremation ash rubbed into his skin and a tiger skin around his waist, with wild dreadlocked hair and smoking ganja. Daksha worried Shiva couldn’t support his daughter and wanted her to have a more suitable husband, but Sati was over the moon and they married. When Sati arrived at her new home on Mount Kailash, she saw a crystal palace, a mandala of great beauty. Her father did not have the merit to see things as they really are with pure perception and his dislike for Shiva grew.

The angered Sati took the form of the goddess Adi Parashakti and cursed her father and his sacred yagna ritual. Then she ignited her inner yogagni (yogic fire), set herself ablaze and burned to death.

One day, Daksha decided to host the great horse sacrifice, the Ashvamedha Yagna, and invited all the devas except his son-in-law, Lord Shiva. Devi Sati was certain her father made a mistake and left her abode in Mount Kailash to appeal to her father. She beseeched Daksha to show her husband respect. He not only refused, but insulted Sati in front of his guests. He heaped abuse on Shiva calling him an atheist and cremation ground dweller and cited Shiva’s wild nature and poverty as reasons for his not being invited into the yagna. When Daksha did not stop yelling, the angered Sati took the form of the goddess Adi Parashakti and cursed her father and his sacred yagna ritual. Then she ignited her inner yogagni (yogic fire), set herself ablaze and burned to death. This sparked the custom of Sati Pratha, whereby widows immolated themselves on their husbands’ funeral pyres for centuries. The Bengal Sati Regulation banned Sati practice in all jurisdictions of British India on December 4, 1829.

When Shiva heard what happened he flew into a rage. Angered and grief-stricken, he performed the terrible Tandava Nritya, or Dance of Destruction. He plucked two dreadlocks from his hair and thrashed the ground with them. One transformed into Virabhadra, Shiva’s destructive and terrible incarnation, a fierce warrior with eight hands holding weapons and possessing a dark complexion. The second arose as Bhadrakali, or Rudrakali, the Supreme Goddess’s violent and intense incarnation with 18 hands holding discus, spear, trident, dagger, scimitar, sword, mace, vajra, conch shell, drinking vessel, goad, waterpot, cleaver, shield, bow and arrow and demon head. Shiva ordered them to wreak havoc.

Virabhadra (as in Virabhadrasana or Warrior pose) appeared like a storm, with three burning eyes, wild hair, and a garland of skulls. He broke the sacrificial vessels, polluted the offerings, insulted the Brahmin priests, trampled on Indra, broke the staff of Yama, and scattered all the gods. A celestial war ensued with gods in chariots sending fiery arrows. The firmament reverberated with thunder and lightning. Earthquakes, tsunamis, hurricanes, floods, landslides, storms and fire erupted. It ended with Virabhadra swallowing Vishnu’s discus and Vishnu bowing down to his power and giving him permission to punish Daksha. Daksha was beheaded. The sacrifice was ruined and Sati’s curse was manifested.

As the obstruction of the yagna will create chaos and severe ill effects, Brahma and Vishnu went to the grief- stricken Shiva and asked him to stop dancing. They comforted him and showed their sympathy. And they requested him to allow the yagna to be completed; Shiva agreed.

Vishnu threw his Sudarshan Chakra and dismembered Sati’s lifeless body (and as per Vaishnava Puranas) into 51 pieces that fell to Earth, to become sacred sites where people pay homage to the Goddess.

One version of the story says that Lord Shiva performed his fearsome and awe-inspiring dance with Sati’s charred body on his shoulders. During this dance, Sati’s body came apart and the pieces fell to different places on earth. 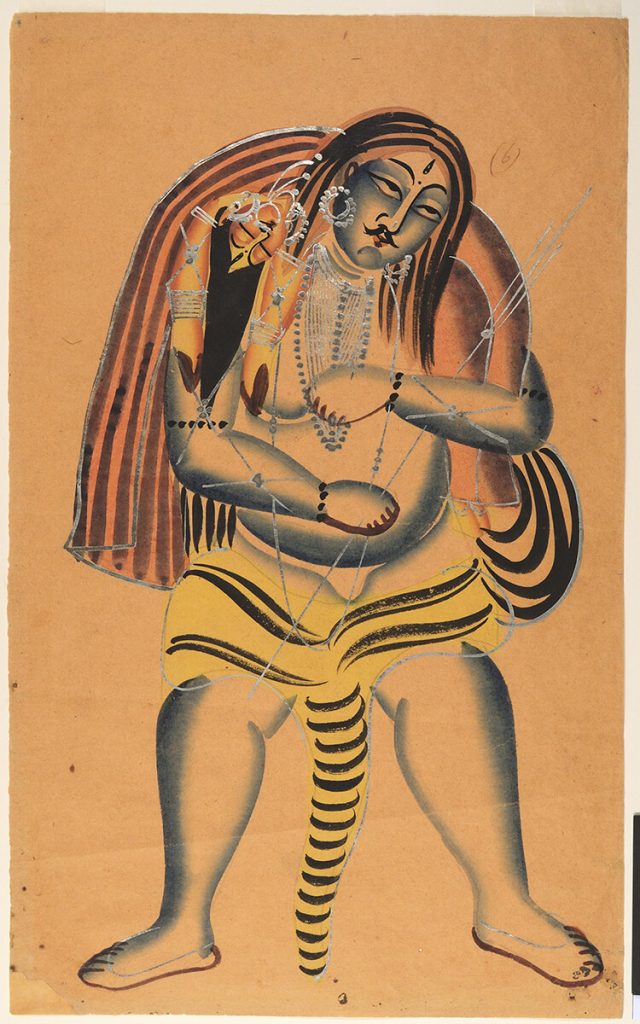 Above, Shiva Carrying the Corpse of Sati on His Trident.
1800s opaque watercolor and gold on paper. Himachal Pradesh, India.

In another, Shiva placed Sati on his shoulders and roamed about the universe, for eons, crazed with grief. The Gods eventually asked Vishnu to restore Shiva to normalcy and calm. Vishnu threw his Sudarshan Chakra and dismembered Sati’s lifeless body (and as per Vaishnava Puranas) into 51 pieces that fell to Earth, to become sacred sites where people pay homage to the Goddess. The places where they landed are called Shakti Peeths. 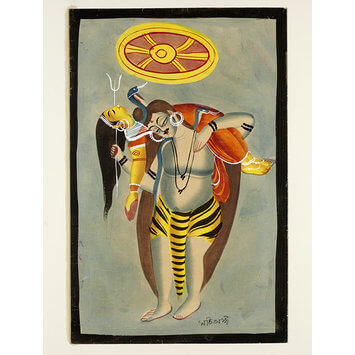 Both versions agree that Sati’s body was dismembered although there is some disagreement about the number of body parts and where they fell. Some say that the number 51 symbolizes the major rivers and their tributaries. Others say that 51 is the total number of joints where the Goddess is established at Nyasa (tantric visualisation practice), or that the 51 Shakti Peeths link to the 51 syllables in the Sanskrit alphabet. These places are also said to be Veej (Bij) mantras, or the seeds of the primordial sounds of creation.

Shiva stayed in isolation and solitude until Sati reincarnated as Parvati. Like Sati, Parvati took severe austerities, gave away all her royal privileges and went to the forest. Shiva tested her affection and devotion in disguise. He eventually realized Parvati is Sati herself and they married. This legend appears in detail in tantric literature.

Above, Names of the 51 Shakti Peeths with their unique aspects in the form of fragments of Devi Sati.

Kalighat Kali temple is located in the heart of the city of Kolkata, and according to many, the city was named after the Kalighat Temple. The toe of the Goddess was dropped here. Inside the sanctum sanctorum, Goddess Kali is half seen from above as the rest of the goddess is kept underground. Goddess Kali is black in colour with large red eyes and a huge gold tongue. Legends referring to Kali worship here date back to the 12 C.E., where a devotee worshipped her toe in the jungle. In 16 C.E., a hut with thatched roof and mud base was built by King Manasingha and is considered to be the ‘original’ temple of Kali Ma. This shrine grew to its present form thanks to the Sabarna Roy Chowdhury family of Bengal who built the Kalighat Kali temple in 1809 C.E.

This holy seat of Goddess Adi Shakti is located on the banks of Kopai River in the Birbhum district of West Bengal. Theright waist, or pelvis, of the Holy Mother dropped at this place after the Sudarshan Chakra of Lord Vishnu mutilated the lifeless body of Sati from the arms of Mahadev. Kankal means skeleton in Bengali. Devi is worshipped as Devgarbha here.

The legend of the famous Rishi Ashtavakraya is associated with this shrine of Bakreshwar. Situated by the banks of River Paaphra, in Birbhum district of West Bengal, this Shaktipeeth is said to be enshrining the eyebrow and the mind of Devi Sati. It is believed that Ashtavakraya Muni requested Lord Vishwakarma to design and build the temple for him. Though, the current edifice was built by Darpanarayan in 1761 AD.

Tarapith is located by the banks of the Dwarka River at Rampurhat in Birbhum District. The third eye of Mata Sati fell at this place, thus known as “Tara” pith. (Although some records don’t include Tarapith to be a peeth.) The Dochala temple is decorated with the terracotta motifs inscribing the ancient tales of the Puranas. According to the ancient scriptures, when Lord Shiva was burning from the effect of the poison that he consumed from the Samudramanthan, Devi Tara appeared and saved his life by breastfeeding Lord Mahakala. She is also a form of Goddess Kali – Adi Shakti – His divine consort.

Nalhati
Nalateshwari Shakti Peeth
Larynx
It is believed that the larynx of the Goddess fell at the place named Nalhati. In Bengali, the larynx or throat is known as nala, thus the pilgrimage site is known as Ma Nalateshwar Temple of Nalhati, a small hamlet in the Birbhum district of West Bengal. According to the legend, it was Lord Kamdev, who first noticed the larynx of Devi Sati in the nearby woods and from then onwards the place became famous as a Shakti Peeth. Devi is worshiped as Ma Nalateshwar here.

Attahas Fullara
Fullara Shakti Peeth
Lower Lip
The holy shrine of Attahas Fullara Devi is located by the banks of the Ishani River in the remote village of Birbhum and the Shakti Peeth enshrines the lower lip of Sati. The word attahas means “loud laughter”. Devi is worshiped here as Phullara. It is believed that Lord Hanuman collected blue lotuses for Shri Ram from the temple pond at this Shakti Peeth when he was about to worship Devi Durga before the combat with Ravan.

Kiriteshwari
Vimla Shakti Peeth
Crown
The crown of the Devi fell at Kiritkona village in the Murshidabad district in West Bengal. Legends say that the cha- ran amrita from the temple was taken for Mir Jafar during his last days as he was suffering from severe leprosy. The person is known for his historic treachery towards Siraj-Ud- Daula, the Nawab of Bengal. The present temple was built by King King Darpanarayana Roy during the 19th century C.E.

Ratnavali Anandamayee
Kumari Shakti Peeth
Right shoulder
The right shoulder of Goddess Sati dropped at Anandamayee Temple on the banks of River Ratnakar located in the Hooghly district of West Bengal. Devi is worshiped as Kumari at this Shakti Peeth.

Nandikeshwari
Nandini Shakti Peeth
Neck Bone
Goddess Shakti is known as Nandini at Nandikeshwari and is worshiped by Nandi, the holy bull of Lord Shiva. The neck bone of Mata Sati fell at Shainthia, a small town in the Birbhum district of West Bengal.

Jogadya
Jogadya Shakti Peeth
Big toe right foot
The Jogadya Shakti Peeth is situated at Kshirgram in the Burdwan district of West Bengal. It enshrines the great toe of Goddess Sati. The deity is worshiped as Jogadya, along with her Bhairav (Shiva), Kheer Khandak, at this holy seat of Shakti.

The right wrist of the Goddess fell at Ujani, near the village of Ghuskara, in Burdwan district of West Bengal. Here, the divine mother is worshiped as Mangala Chandika, or Mangal Chandi.

Vibhas, Bargabhima temple
Kapalini Shakti Peeth
Ankle
The left ankle of the Goddess dropped by the banks of Roopnarayan River in the East Midnapur district of West Bengal. Around 1150 years ago, the Bhimakali temple was built by a maharaja of the Mayur Dynasty.

Trisrota
Left Leg or Part of the knee
The left leg of Sati fell on the banks of Teesta River in Jalpaiguri district of West Bengal. The Teesta, or Trishrota (combination of three tributaries) is mentioned in the Puranas. Trisrota temple is dedicated to Bhramari Devi.

Bahula
Left Arm
The left arm of Sati fell at Bahula, on the banks of the Ajoy River at Ketugram, near Ketwa, in the Birbhum district of West Bengal. She is worshiped in the form of Goddess Bahula. ♦

Read Part Three of The Goddess Episodes, WHO IS DEVI DURGA?