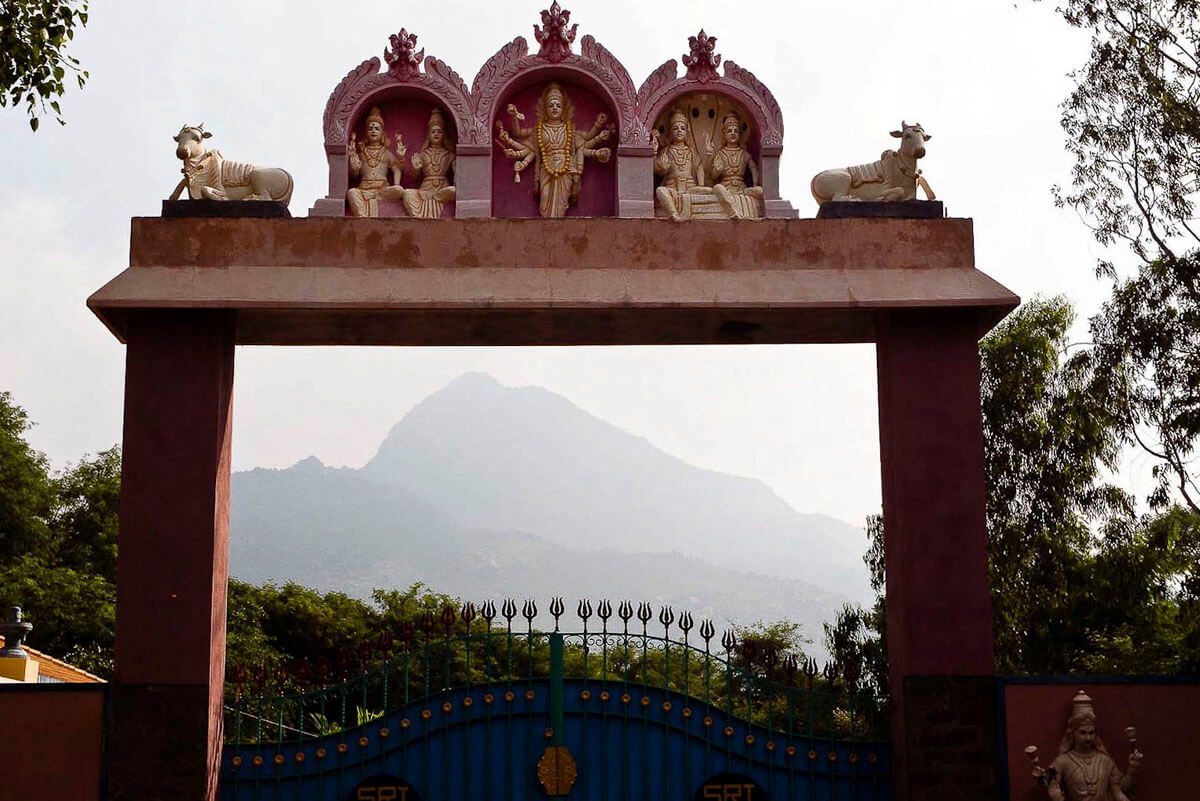 My travels in Tiruvannamalia, India, take me to the heart of the Holy Mountain and the teachings of Ramana Maharishi.

In South India there is a lonely hill that is revered in Hindu sacred tradition and legendary history. Arunachala, the Holy Mountain in Tiruvannamalia, rises up as some anomaly thrown up by the earth under the stress of violent volcanic eruption ages before even the coal-bearing strata were formed. The peak is imposing, yet it offers no pretty panorama of balanced proportions. Rather, it is ungainly with sides jagged and broken, whose face is a mass of jumbled rocks and thorny scrubs. This granite rock has been dated to the earliest epoch of our planet’s crust, long before dinosaurs moved their ungainly forms through the primeval forests that covered our earth.

Arunachala is as ancient as the planet earth itself. The Tamil traditions not only speak of the vast antiquity of this and other hills, but they assert that it’s older than the Himalayas. It’s believed to be a remnant of the vanished continent of sunken Lemuria, of which indigenous legends still keep a few records. A great seer, who lived at the foot of the mountain, spoke of the lost continent that once stretched all the way across the Indian Ocean, embracing Egypt, Abyssinia, and South India. There are similarities in the religion, society and monuments of the Dravidians in South India and those who settled on the Nile. It is believed that the culture of lost Lemuria was carried westward to mingle in Eygpt with that of Atlantis, which disseminated its civilization to many a distant place in the near east. 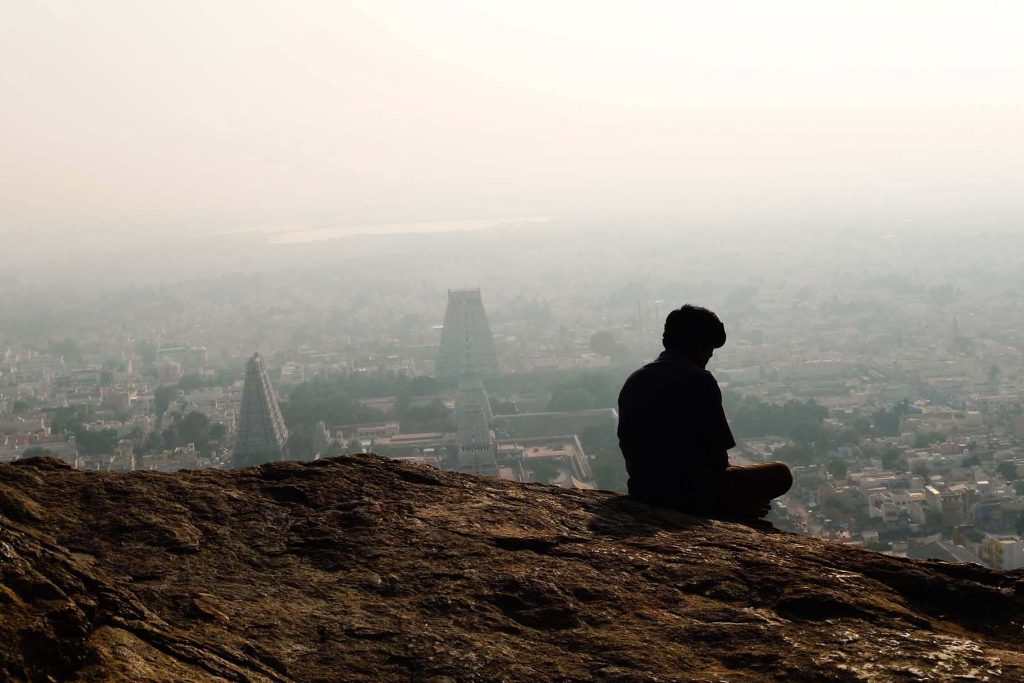 In the Hindu tradition, an early reference to Arunachala can be found in the classical text, Rigveda, and has made Tiruvannamalai one of the greatest Saivite (Siva) sites in India, with a sprawling 24-acre temple complex at the base of the mountain that attracts hundreds of thousands of pilgrims. Aranachula is considered to be a manifestation of Shiva. The story goes that Siva was mourning the loss of his wife Sati and, while wandering nude in the forests of Daruvana, he aroused the wives of certain sages. The jealous sages cursed the god’s linga (phallus) to fall off. As it touched the earth it grew to immense size like a great shining column. The gods Brahma and Vishnu saw it when its top had reached upwards beyond the clouds and its lower end was buried deep in the earth. They decided to investigate. Taking the form of a boar Vishnu dived into the depths of the primeval ocean to reach the base of the column, and Brahma taking the form of a swan flew up to its top. When they returned Vishnu honestly confessed that he could not find the foundations, while Brahma boasted that he had reached the summit. At this moment Siva appeared, denounced Brahma as a liar, praised Vishnu for his honesty. At the request of Vishnu, Shiva left part of his linga in its tejas, or fire form, on the Arunachala hill.

Once a year, in the Tamil month of Karthigai (November/December), at precisely 6 pm as the sun sets and the full moon rises, Saivites light a huge cauldron with 3 tons of ghee mixed with camphor on top of the mountain that burns for 10 days and the column of fire can be seen from miles away. This fire ceremony has been going on for thousands of years. Immense good fortune is promised to the worshipper who beholds the first flame that leaps out of the cauldron on the dark December night. In Skanda Purana, Shiva said:

“Though in fact fiery, the dull appearance of a hill on this spot is because of grace and living solicitude for the spiritual uplift of the worlds. Here, I always abide as the perfect being. Meditate then that in the Heart of the Hill surges the spiritual glory within which is contained all the world… what cannot be acquired without infinite pains – the true meaning of the scriptures’ mystic revelation – is easily got by all who either directly gaze at this hill or even concentrate their thoughts upon it, if afar. I ordain that residence within a circle of 30 miles of this hill will suffice to burn off all defects and blend a man with the Supreme Spirit.”

There is an air of deep mysticism around the temple, the hill and its environs and has long been associated with many yogis and siddhars. More recently, Sri Ramana Maharishi (1879-1950), perhaps modern India’s greatest sage, lived here for 53 years. He is the great Advaita Vedanta master who taught Atma-Vichara, or Self-inquiry, as the direct path to Self-realization. He directed people to look inward rather than outward for liberation and urged them to look towards the spiritual heart and ask the question, “Who am I?”

Word spread about the illuminated sage of Tiruvannamalia and many Western seekers came to visit. Frank Humphreys discovered Ramana in 1911, and wrote articles on him in The International Psychic Gazette. Paul Brunton first visited him in 1931 and claimed him to be “one of the last of India’s spiritual supermen,” a true yogi among many fakirs in his book, A Search in Secret India; Somerset Maugham modeled the spiritual guru in his 1944 novel, The Razor’s Edge, on Ramana. The French photographer, Henri Cartier-Bresson, was there at the time of his Maha Samadhi (death). Even the enlightened Indian sage, Paramahansa Yogananda, paid a visit. However, even as his fame spread, Sri Ramana maintained his belief in the power of silence only speaking on rare occasions, as well as his lack of concern for fame or criticism. His lifestyle remained that of a renunciate. He considered his own guru to be the Self, in the form of the sacred mountain Aranachula.

On the importance of Arunachala, Sri Ramana Maharishi wrote in Arunachala Mahatmyam:

“While other holy places are sacred because they are the abodes of Lord Siva, Arunachala is Lord Shiva himself… It is this place that bestows jnana (Self-knowledge) and for those few who seek jnana, Arunachala always makes itself known through some means or other.”

And so, after many years of hearing about Tiruvannamalai and Ramana Maharishi, Arunachala beckoned me and I experienced a very auspicious New Year 2010 under the full moon, Blue Moon and lunar eclipse.