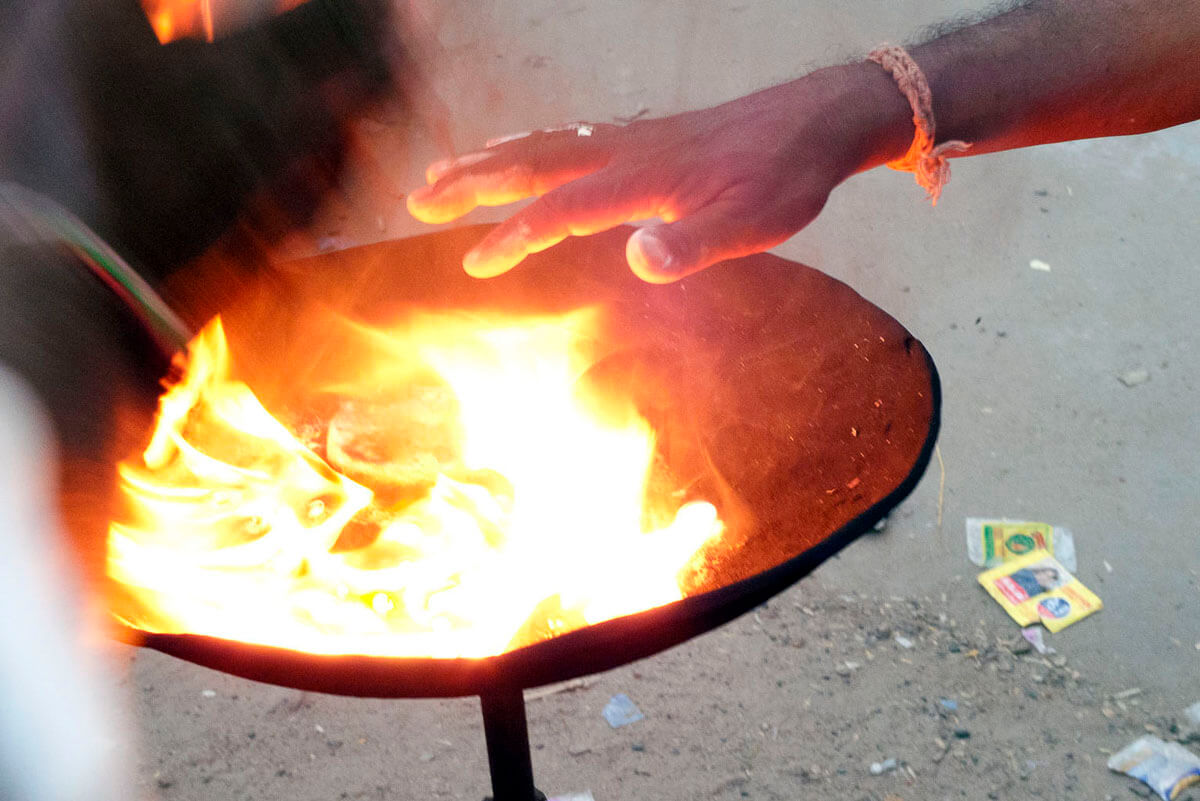 Giri Pradakshina is an ancient ritual where thousands of Siva devotees circumambulate Arunachala as an act of bhakti (love) for Siva and ultimate union with the Self. While it can be done at any time, certain times are considered more powerful. New Year’s Eve is particularly auspicious this year because it’s full moon, blue moon and lunar eclipse. Arunachala has always been renowned as the bestower of liberation, the destroyer of the ego, the remover of the false notion ‘I am the body’ – as the jnana-Guru par excellence. The whole hill is sacred.

It is Siva himself. Just as we identify ourselves with a body, so Siva has chosen to identify himself with his hill. It is out of compassion to those who seek him that he has chosen to reveal himself in the form of a hill visible to the eye. According to Ramana, the word pradakshina has a very precise meaning:

“The letter pra stands for removal of all kinds of sins; da stands for fulfilling desires; the syllable kshi stands for freedom from future births, na stands for giving deliverance through jnana.”

I join the throngs of saffron-clothed jnanis, or sadhus, and pilgrims walking the eight-mile circuit, barefoot, with the mountain on the right. It’s a festive occasion and the path is dotted with curious shrines and miniature temples, ancient tanks and sacred lingas stones. Food stalls offer exquisite Indian treats that taste like ambrosia from the gods. Priests perform puja in the temples. Flowers adorn statues of Nandi, the bull, who is Siva’s vehicle, and his son Ganesh. Fire is lit at altars and flames leap up towards the heavens. Arunachula is the blazing wild Hill of Fire – the fire of knowledge, jnanagni, – that burns all our worldly desires to ashes. I pass my hand through the flames and pray for guidance on my spiritual path, to destroy the ego and rest in my spiritual heart, to live the truth, and to have compassion for all living beings.

The act of walking around Arunachala is considered the highest form of satsang, and even those who don’t understand the spiritual implications of the act will benefit. The Tamil poet, Sri Sadhu Om, eloquently describes the spiritual benefits of Giri Pradakshina:

“A cow grazing round and round its peg, does not know that the length of its rope is thereby decreasing. Similarly, when you go round and round Arunachala, how can your mind know that it is thereby subsiding? When the cow goes round more and more, at one point it will be bound tightly to its peg. Similarly when the mind lovingly goes more and more round Arunachala, which is Self, it will finally stand still in Self-abidance, having lost all it movements [vrittis].”

This echoes Yogic philosophy that states that the purpose of yoga is to still the mind, as an agitated wandering mind causes suffering. In Patanjali’s Yoga Sutras, verse 1.2 says, “Citta Vritta Nirodhah”, which means ceasing the fluctuations in the mind. Yoga is the control of the thought waves of the mind. It is the ability to direct the mind exclusively towards and object and sustain focus in that direction without any distractions. 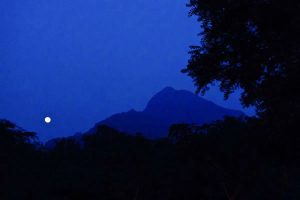 The full moon peers down from an indigo sky, illuminating the dark ever-present silent shape of Arunachala. I am enchanted by its spiritual power. Its very presence gives me the strength to continue to circumnambulate its base. This unbeautiful mountain captures my heart. It imprisons me from the first moment my eyes glance at it until the last reluctant turning away of my head.

As I finish writing this article on 14 April, 2010, I realise today is the anniversary of Sri Ramana Maharishi’s death. Sixty years ago, he shed his mortal coil. In November 1948, a tiny cancerous lump was found on his arm and was removed by the ashram doctor. Soon, another growth appeared and another operation performed by an eminent surgeon. The doctor told him that a complete amputation of the arm was required to save his life, but Ramana refused. He remained peaceful and unconcerned. As his condition worsened, he continued to be available for his thousands of visitors, even when his attendants urged him to rest. Reportedly, his attitude towards death was serene. To those who begged him to cure himself for the sake of his devotees, Sri Ramana is said to have replied, “Why are you so attached to this body? Let it go. Where can I go? I am here.”

By April 1950, Sri Ramana was too weak to go to the hall, and visiting hours were limited. Visitors would file past the small room where he spent his final days to get one final glimpse. Swami Satyananda, the attendant at the time, reports, “On the evening of 14 April 1950, we were massaging Sri Ramana’s body. At about 5 o’clock, he asked us to help him to sit up. Precisely at that moment devotees started chanting ‘Arunachala Siva, Arunachala Siva’. When Sri Ramana heard this his face lit up with radiant joy. Tears began to flow from his eyes and continued to flow for a long time. Sri Ramana’s breathing became gradually slower and slower and at 8:47 p.m. it subsided quietly.”

The French photographer, Henri Cartier-Bresson, who was staying at the ashram prior to Sri Ramana’s passing, recounts the event: “It is a most astonishing experience. I was in the open space in front of my house, when my friends drew my attention to the sky, where I saw a vividly-luminous shooting star with a luminous tail, unlike any shooting star I had before seen, coming from the South, moving slowly across the sky and, reaching the top of Arunachala, disappeared behind it. Because of its singularity we all guessed its import and immediately looked at our watches – it was 8:47 – and then raced to the Ashram only to find that our premonition had been only too sadly true: the Master had passed into parinirvana at that very minute.”

The luminous star was seen in India as far away as Madras and Bombay and millions mourned Ramana Maharshi’s passing. A long article about his death in the New York Times concluded: “Here in India, where thousands of so-called holy men claim close tune with the infinite, it is said that the most remarkable thing about Ramana Maharshi was that he never claimed anything remarkable for himself, yet became one of the most loved and respected of all.” Indeed, despite the fame that surrounds him, Sri Ramana, did not publicise himself as a guru, never claimed to have disciples, and never appointed any successors. Instead, he remained in one place for 54 years, offering spiritual guidance to anyone of any background who came to him, and asking nothing in return. He viewed all who came to him as the Self rather than as lesser beings. He considered humility to be the highest quality. He said the deep sense of peace one felt around a jnani was the surest indicator of their spiritual state, that equality towards all was a true sign of liberation, and that what a true jnani did was always for others, not themselves. 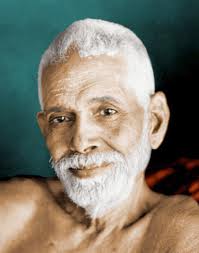 I look at the photograph of Sri Ramana on my desk, a colour portrait of him against an emerald green background. His expression is so calm and serene. It radiates pure, unselfish love. I look into his brown eyes and my heart melts. I feel the depths of his compassion and humility. He has the kindest face I’ve ever seen. It creates a yearning in me to be kind. My heart opened in the presence of Arunachala and I’m most grateful. Sri Ramana taught in silence much of his life and it is believed he still teaches from beyond. At the time of his death he comforted his devotees with the words, “Where can I go? I am here.” You know what? I actually believe him. He continues to teach from his silence. I feel his presence from beyond and it gives me a serene sensation of peace. 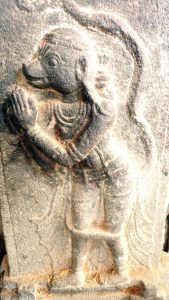